I am a returning customer

If you already have an account with us, please login at the login form.

Thank you for registering with Две-Сферы!

You will be notified by e-mail once your account has been activated by the store owner.

If you have ANY questions about the operation of this online shop, please contact the store owner.

Your shopping cart has been saved, the items inside it will be restored whenever you log back into your account. 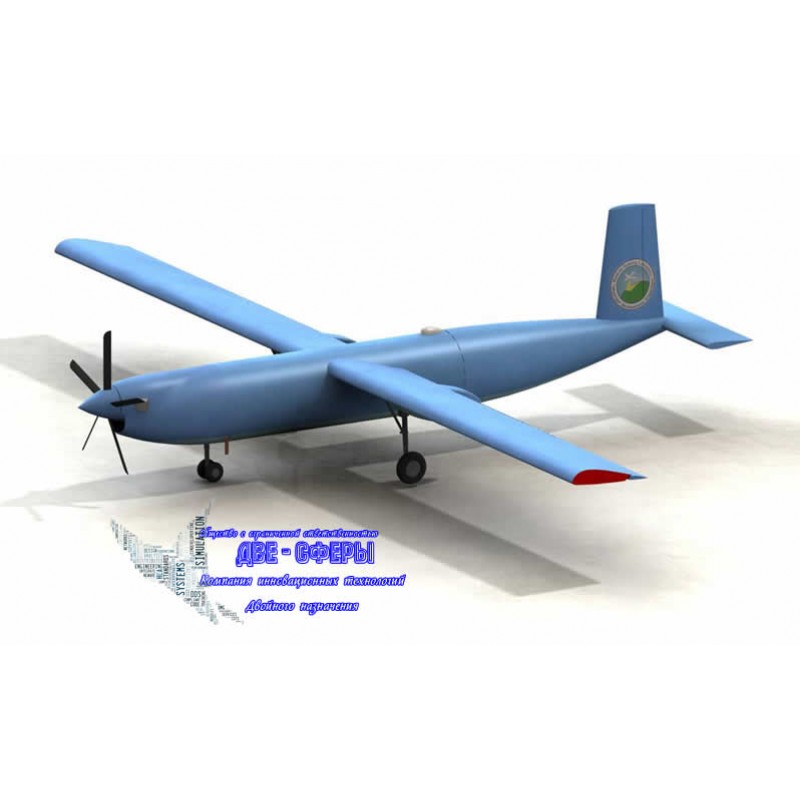 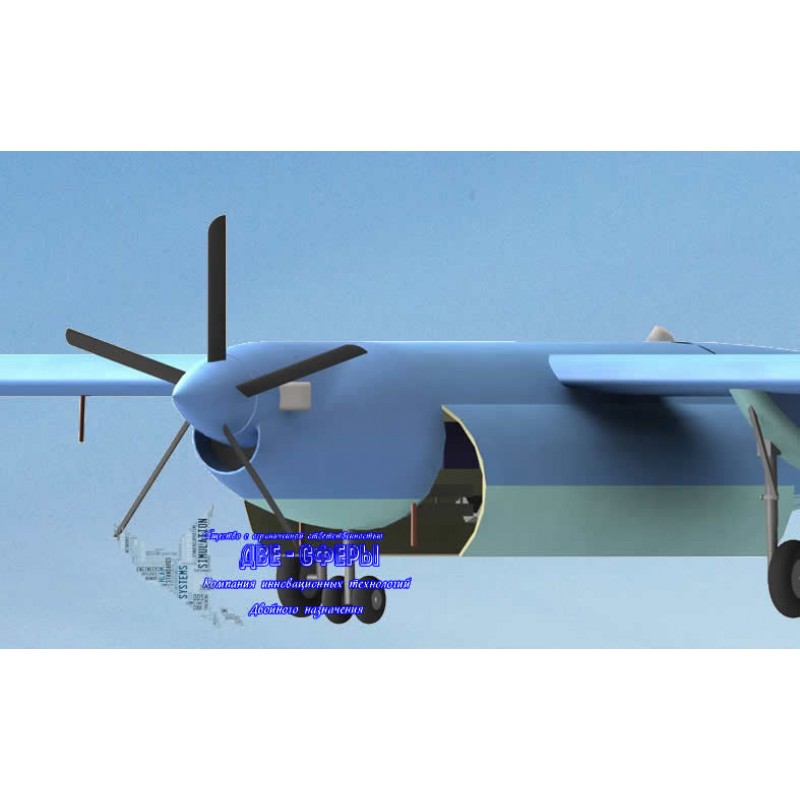 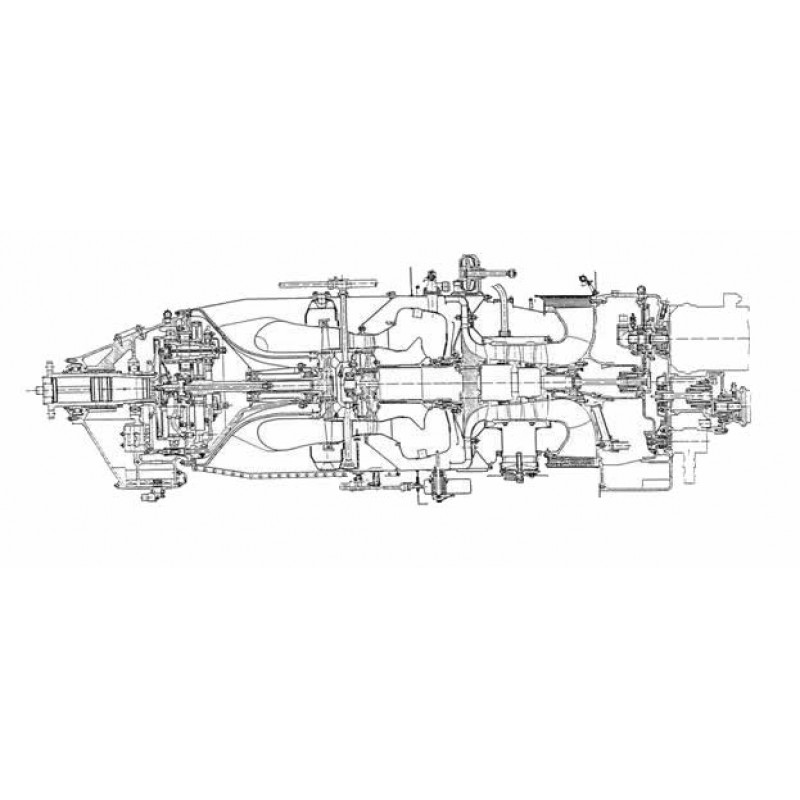 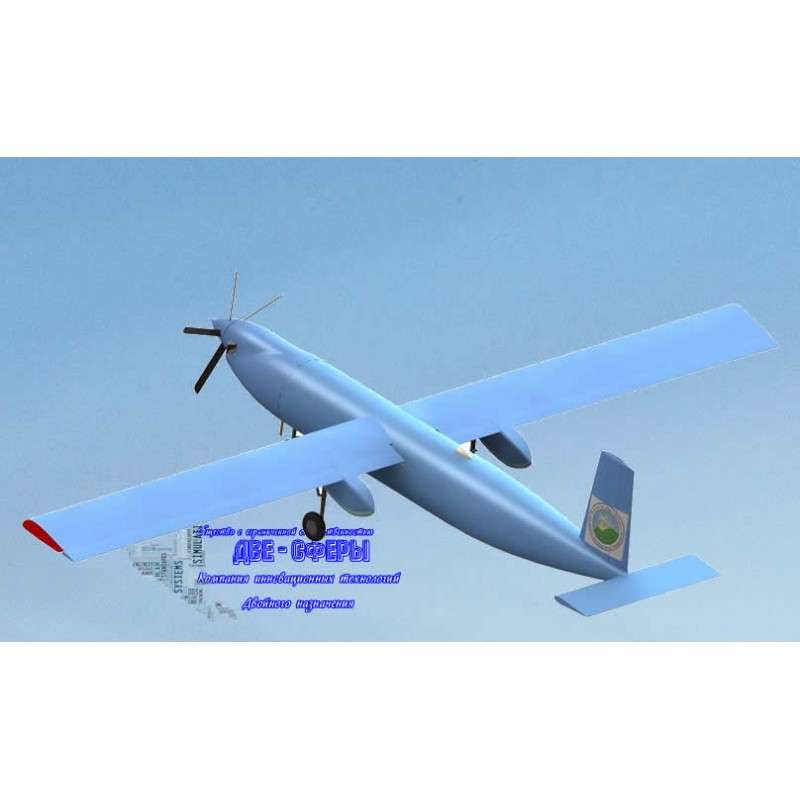 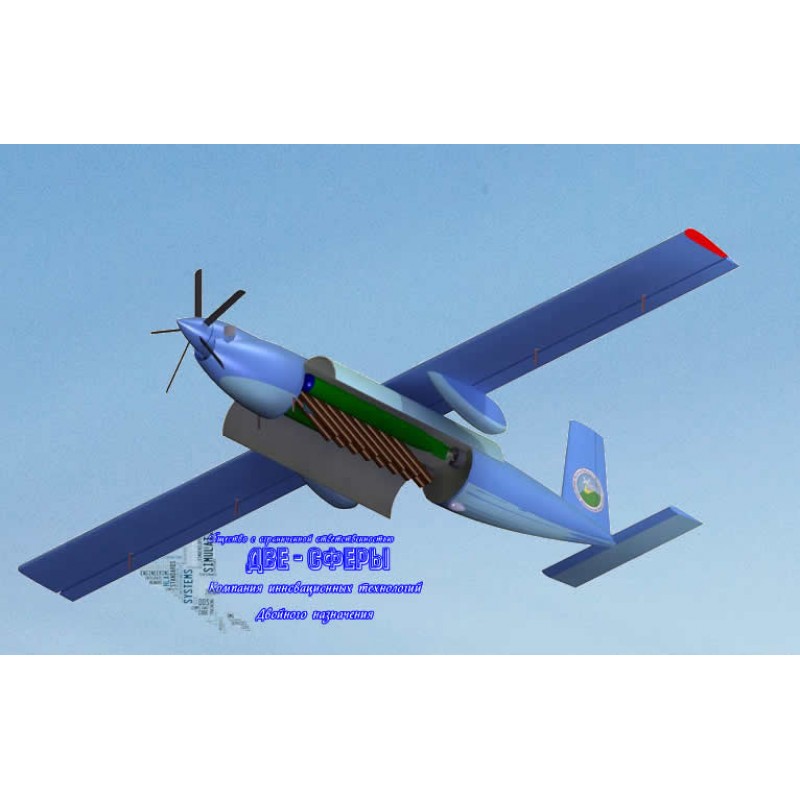 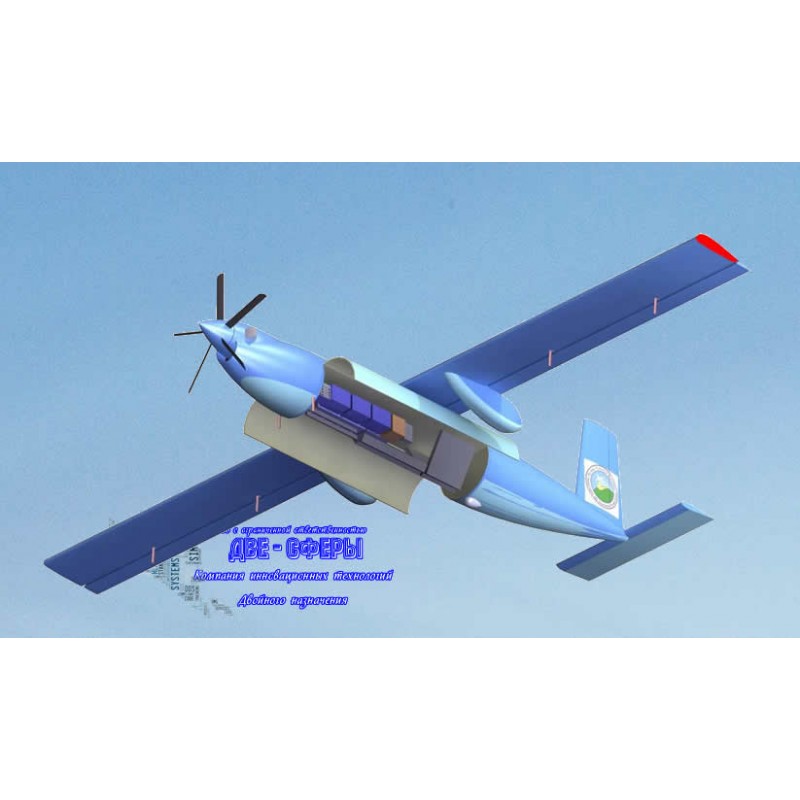 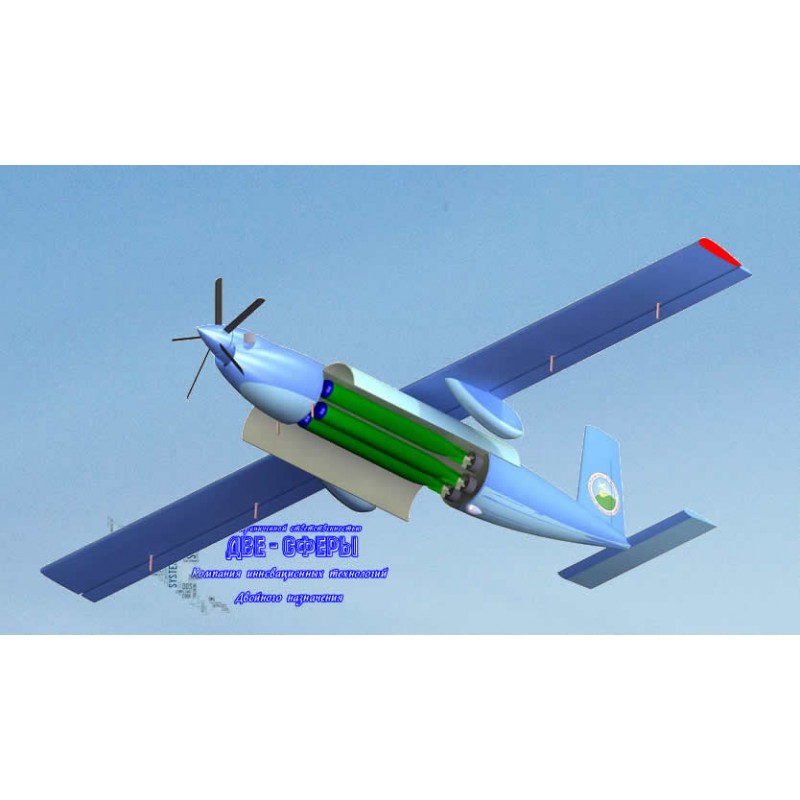 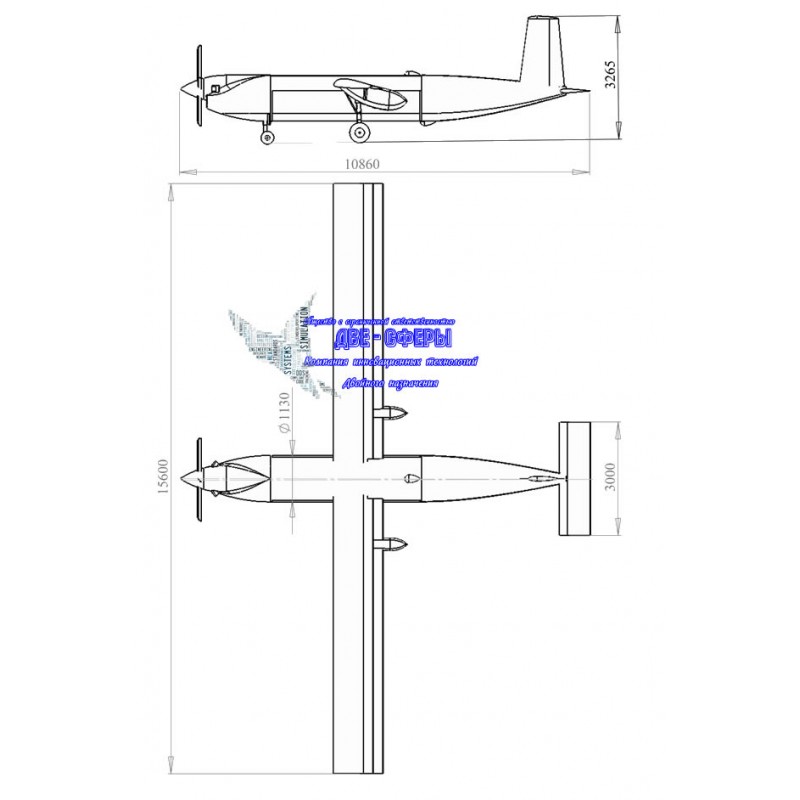 The unmanned aerial vehicle (UAV) M14 is designed to search for and destroy submarines and surface ships in the open sea. In addition, due to the 5 (10) hour flight duration and the presence of a large payload compartment, it is possible to perform various types of reconnaissance, patrolling, search operations and cargo transportation. Main characteristics Normal takeoff weight - 3750 kg..

The unmanned aerial vehicle (UAV) M14 is designed to search for and destroy submarines and surface ships in the open sea. In addition, due to the 5 (10) hour flight duration and the presence of a large payload compartment, it is possible to perform various types of reconnaissance, patrolling, search operations and cargo transportation. Main characteristics Normal takeoff weight - 3750 kg Payload weight (normal) - 1200 kg Payload mass (maximum) - 1500 kg Fuel weight - 1100 ... 2000 kg Dimensions: Wingspan - 15.60 m Length - 10.86 m Height - 3.20 m Power - 750 hp Maximum speed - 440 km / h Cruising speed - 400 km / h Stall speed - 111 km / h Flight duration: normal - 5 hours (at 15% overload up to 7 hours) maximum - 10 h Flight range - 2000 ... 3900 km Ceiling - 8000 m Operational overload - +3.8; -1.52 Required runway length - 600 m Aircraft technical description The aircraft is a cantilever high-wing aircraft with a straight wing, made according to the normal aerodynamic configuration. This time-tested scheme provides excellent flight performance and excellent stability and controllability. The pulling power unit provides easy access for servicing the motor and propeller, as well as protecting the engine and propeller from dust, sand, gravel, ice chips and splashes. A tricycle landing gear with a nose wheel makes it possible to operate from poorly prepared unpaved airfields. The aircraft's ability to glide, low landing speed and large wheels make it possible to make a safe landing in case the engine stops in flight. The compact dimensions of the M14 UAV and the detachable wing consoles allow it to be stored on deck and in the hold. Fuselage In order to ensure high aerodynamic characteristics, the fuselage is made in the form of a body of revolution with an internal compartment of the discharged payload. The fuselage consists of three technological parts: bow, central and aft. In the bow there is a compartment of the power plant, a bow strut and part of the aircraft systems. The middle cylindrical part contains the payload compartment and the aircraft onboard systems. The load compartment is heated, ventilated and closed with two opening fiberglass doors. The sash can be removed if necessary. Aircraft systems are located in the upper segment of the middle fuselage and on the frames that delimit the compartment. The longitudinal beams and frames of the upper segment take the load from the payload holders. The tail section carries the tail unit and provides a smooth flow around the rear section. It houses small-sized electrical and radio equipment. The fuselage is made of aluminum alloys and fiberglass. The radio transparency of fiberglass allows you to place various antennas inside the fuselage. This solution allows the fuselage to be aerodynamically clean. Wing The straight wing of high aspect ratio provides the M14 UAV with high aerodynamic quality and good anti-roll properties (smooth stall on the nose). The wing lip consists of a center section and two consoles, has slotted flaps and slotted ailerons, they provide high takeoff and landing characteristics and reliable controllability at low flight speeds. The wing frame is made according to a single-spar scheme with two additional walls, made of aluminum alloys. Sheathing made of sheet duralumin. The wing is of the "wet" type, i.e. fuel is stored in sealed cavities between the front and rear walls. At the ends of the wing, fiberglass tips with aeronautical lights are fixed. This design is as simple and easy to use as possible. Pylons for suspension of weapons and equipment can be installed under the wing. Plumage The plumage is normal, all-turning, located so as to ensure the specified stability and controllability of the aircraft in all flight modes The empennage consoles are made straight in plan with a constant profile and chord size. This made it possible to significantly reduce their cost and increase maintainability, since the same equipment is used for the production of these units, and a similar spare parts and accessories are used for repair. The frame and the plumage plumage are made of aluminum alloys. Chassis The chassis is retractable with a nose caster wheel. The main supports are retracted during the flight along the wing chord into special fairings, the bow - into a niche under the power plant compartment. Telescopic racks are made of high-strength steel. Good permeability on the ground is ensured by wide aircraft wheels 500x150 mm. Ground control is carried out by separate braking of the main wheels. Power point In the basic version, an aircraft turboprop engine with a pulling low-noise five-blade reversible propeller VI8.510 is used as an engine. The engine and the propeller are Czech-made Motorlet company (Prague).

Join 60.000+ subscribers and get a new discount coupon on every Wednesday.

ДВЕ-СФЕРЫ(CIDUT) App is now available on Google Play & App Store. Get it now.